Every drop of water counts 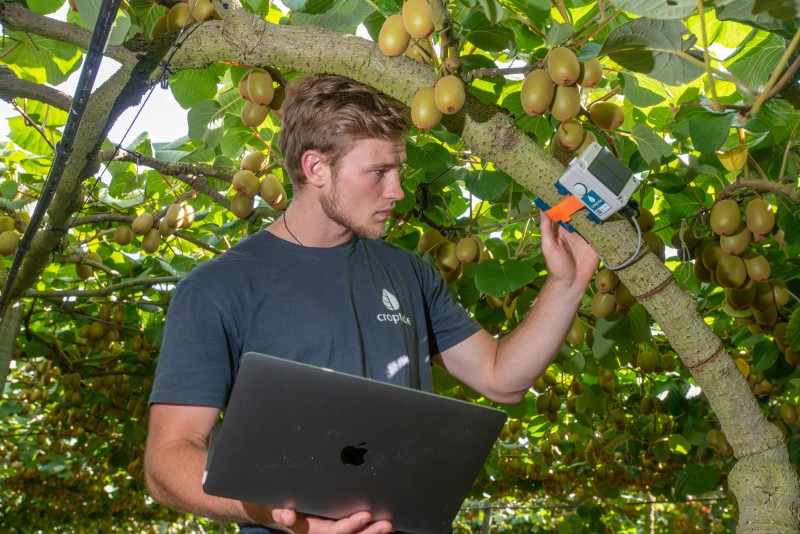 A Hawke’s Bay start-up is trialling water sensing technology that if successful, could result in dramatic savings in this precious resource across the region.

Croptide, a company owned and founded this year by Hawke’s Bay engineers Finn Brown and Hamish Penny, is conducting trials to prove it can automate the process of measuring ‘stem water potential’.

Stem water potential measures water stress in plants, akin to blood pressure in humans. As the soil dries or humidity, wind or heat load increases, it becomes increasingly difficult for the roots to keep pace with evaporation from the leaves. Under these conditions the plant begins to experience ‘high blood pressure’. Measuring stem water potential helps determine the optimum time to deliver water to the plant.

Penny says that Croptide has a vision for all permanent crop growers in Hawke’s Bay and around the world to have access to a precise tool that allows them to give plants exactly the water they need.

“This will allow a range of benefits including giving growers a proof point around their water use, as well as offering resilience against the predicted effects of climate change.”

Currently a manual method to measure stem water potential – called the pressure chamber – has been adopted by a few wine companies in Hawke’s Bay including Villa Maria (partner on the current Croptide trial), says Penny.

“Over the 5+ years they have been using it they have anecdotally observed a dramatic decrease in water usage (more than 50%) and significant quality improvements by adopting the pressure chamber.

“There has also been research conducted by Bragato – New Zealand’s wine research institute – on comparing pressure chamber use to soil moisture that found similar improvements across sites in Marlborough and Hawke’s Bay.”

Penny says that similar research has not yet been conducted in kiwifruit and apples, but the focus is on developing the tool first in these industries, then working with growers to understand how to use the data to optimise irrigation.

“There is an acknowledgement from both sectors that more research is required to understand better the exact needs of kiwifruit and apple crops, in order to maximise water efficiency.”

So far, Croptide has received strong support from all of its grower partners. They all have been very supportive of the Croptide mission and are motivated to do the best by their land, maximise efficiency of resource use and build resilience in the face of climate change.

As for the cost, Penny says that Croptide is using a technology that should offer significant scalability and foresee it being offered at a competitive price. “But it is still at the early stages and in the process of building out a business and pricing model.”

Croptide recently raised $1 million in a pre-seed funding round led by Icehouse Ventures, supported by K1W1 and Masfen Group. There are currently 160 Croptide devices being trialled.

Giving the soil an MRI